A Walk in Woodland Park

“It isn’t what you have or who you are or where you are or what you are doing that makes you happy or unhappy. It is what you think about it.” 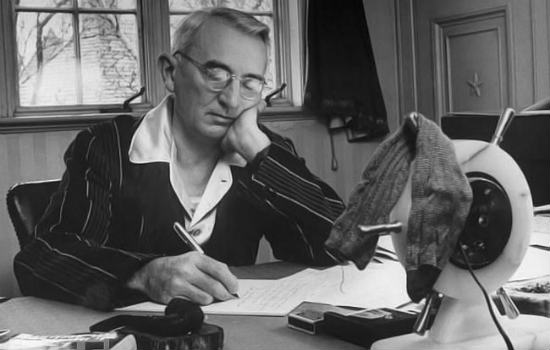 Are you familiar with Dale Carnegie? Some of his work included How to Stop Worrying and Start Living (1948) and colossal bestseller How to Win Friends and Influence People (1936) which is still admired today.

Mr. Carnegie did not grow up in a wealthy home but was born into poverty on a farm in Missouri. But a strong desire to succeed prompted him to attend the State Teacher’s College in Warrensburg Missouri. Mr. Carnegie’s managed to obtain his education in his teens while still having to get up at 4 a.m. every day to milk his parents’ cows. That is what I call, a strong will and determination in reaching for your goals.

Mr. Carnegie’s greatest achievement was when Simon & Schuster published How to Win Friends and Influence People. The book was a bestseller from its debut in 1936, in its 17th printing within a few months. The book had sold five million copies in 31 languages by the time of Carnegie’s death. Additionally, the Dale Carnegie Institute had 450,000 graduates. Moreover, it is said that he had critiqued over 150,000 speeches in his participation in the adult education movement of the time.

So you see, no matter how high the obstacles, the old English proverb rings true, “Where there’s a will, there’s a way”.

As a result, Dale Carnegie’s words of wisdom have prompted me to aim high and write more often. As far as motivation, what has helped me is to never hold back my words. I tend to be very technical at times because I write for other people. And yes, the articles are research oriented. I recently decided to write for just me. This is because writing for others can quickly burn out your individual creative ‘pen in hand’.

But do whatever motivates you and ‘lights your fire.’ Don’t give up or give in. Give it all that you got. So, just now my techie side wanted to take over, ‘all that you got’ is not verbally correct. I have to laugh out loud with such silly antics and prose.

With that aside, I  ponder hard on a story to share with you. Not that I don’t have any stories. I really have a large bundle of them dying to be told. My whole life has been a book of many colors. I have always had a lust for learning, traveling and experiencing many new venues. I have never been bored in my life. Even as a kid I used to going exploring and oftentimes find myself in a sticky situation. Now those are stories I’ll get to at another time.

I have so much to tell. Today I just want to share the most recent experience.

Are you familiar with full moons and how they can make crazy people crazier and some ‘normal’ people off their rocker? Well, this full moon was not only for the Harvest.

I traveled to my favorite town in the area. Tucked in the mountains close to the border of Canada a small ski community resides. It is a quaint little town filled with rustic looking A-framed shoppes and very friendly people. It sort of reminds me of a village you find tucked high up in the Alps.

And talk about festivities, there is a celebration for everything all year round. For more information about this lovely town see Green Living Environment in Whitefish Montana

Well, my normally quiet and peaceful town was suddenly filled with numerous transients. Now I’m not trying to be derogatory, I just don’t know of any other word for people who are homeless and have a gypsy lifestyle.

Now most of the ‘local’ homeless people here are actually homeless. Generally they will stay in temporary housing while the churches try to help them out financially. As well, most of homeless people here are not out for a quick buck or cigarette, begging for money or have anti-government speeches ready at the drop of a hat. It’s a pretty mellow area.

Okay, I was waiting for the city-to-city commuter bus when ‘I spied’ the perfect picture. There was a homeless couple and their dog sitting under the rafters at the performing arts center. I kindly asked if I could take a picture of their dog. They had a multi-colored Pit Bull that was wearing a tattered and checkered coat that matched his personality. The shy dog also had an injured foot with a homemade bandage. Well, the man replied and said that he did mind and that his dog was not a circus dog. Okay, I’m being nice. The guy didn’t just reply, he raised his voice quite aggressively. I stated that I didn’t mean to offend him but the man was not interested in what I said. He only wanted to get his opinion out for the whole world to hear. He yelled about how he want some of the profits I make for ‘his’ picture I never took, about how the sun shines often in Seattle, how they were going to hop a train, and on and on.

Well, it will be a long time before I confront someone with “Do you mind if I take a picture?” Just kidding. 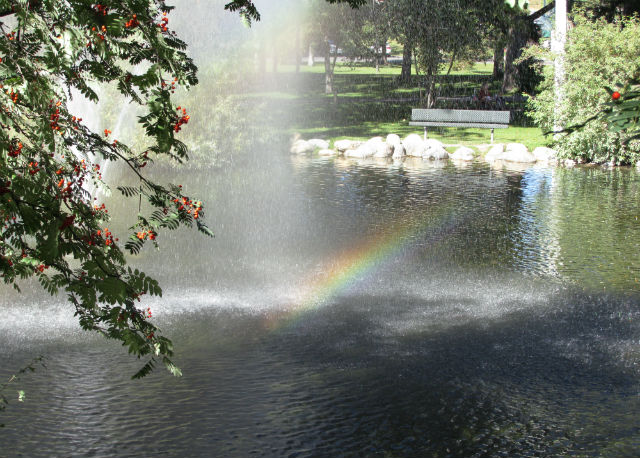 A Walk in Woodland Park

Oh yes, I forgot about the title of this post. Woodland Park is a peaceful park with several flower gardens, a lagoon, playground and numerous picnic areas. And more, you can enjoy the Water Park, the skateboarding park and two miles of walking trails.

Woodland Park is filled with many wild animals including large flocks of geese and ducks. Every once in a while you will spot a few deer, a rabbit or two or wild turkey. In fact, a few months back I was meandering down one of the hiking trails and came across two large rabbits. Unfortunately a couple of teenagers decided to go into the bush after the rabbits. In a short time the two ball of fur went hopping quickly away before I had a chance to get a pic. Here tell that the rabbits in the park were abandoned by their owners. Here is a fabulous story about the community trying to save these bundles of joy: Whatever happened to the wild rabbits at Green Lake/Woodland Park 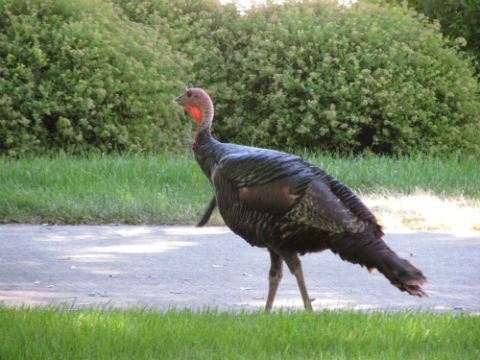 Now it’s not unheard of to get bigger and wilder game in Woodland park. This summer a mountain lion was spotted in town walking a fence line on someone’s property.

Typically wild animals like a mountain lion will go to an area that has more food, such as Woodland Park. There is a lot brush and overgrowth with plenty of acreage to roam. Needless to say, I stayed clear of the park for quite a while just for gp’s. I kept my ears posted for an update but I never did hear anything else about this brave creature.

In the winter the Woodland Park pond becomes an ice skating rink. There is also an old-fashioned warming hut for when you get cold. Talk about winter fun. Bring your skates, a little food and a thermos full of hot chocolate (organic of course). Oh yes, here is the perfect recipe for hot chocolate fans: Coconut Vegan Hot Chocolate

My goodness, I must be hungry. My writing keeps reverting back to food. I ate dinner. Mind you, several pieces of pesto pizza. It must be the drastic change in temperature (it’s supposed be get down to 20° degrees tonight).
Oh yea, the harvest moon. Talk about food and craziness. I had just got a heads up on the weather change around 6 pm tonight at the local health food store. I quickly bought my groceries and mad dashed it home like a crazed chicken to take care of my plants. I had spent a lot of money and time this year on a few special plants from the Himalayans. I wasn’t going to let an early frost get the better of me. The only thing was, I have limited room and wasn’t sure were to put them. These are outdoor plant in pots and not quite acclimated for the extreme weather we get here.

Well, I did manage to squeeze room in a little nook and cranny at the top of the stairs. I do hope they will be happy there. We shall see.

Well, I am off to grab more to eat, and maybe some hot chocolate, until next time. au revoir

All other photos by Copyright © mecheshier

7 thoughts on “A Walk in Woodland Park”